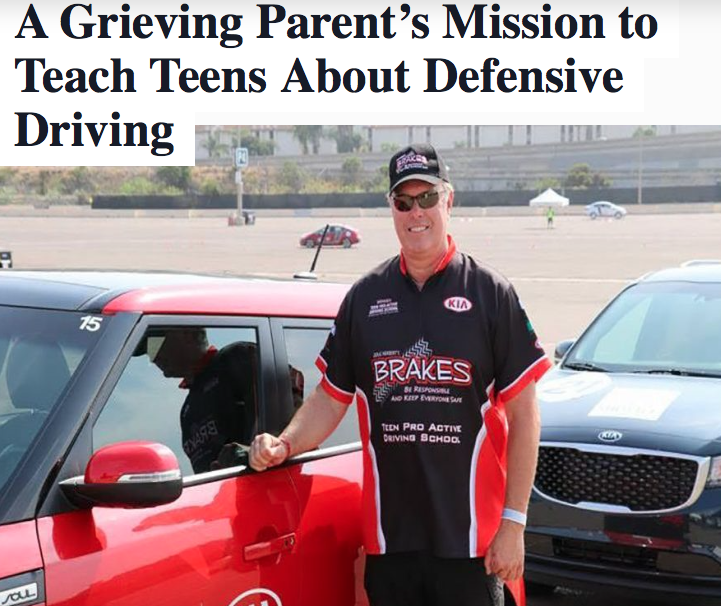 According to the police report, Jon was speeding, lost control, and hit an SUV. The boys died on impact. Herbert was devasted to lose his sons, but he started working through his grief by teaching teens and their parents about driver safety.

“Trying to make sense of that situation, I thought that one of the things that I loved the most besides my boys is cars,” he says. “I didn’t know at the time that car crashes were the number one cause of fatalities for teenagers. And once I found that out, I thought I’ve got to do something here. I’ve got to help make sure that another parent doesn’t get that phone call that their kids were killed in a car crash.”

Herbert, who’s now retired from a career as an award winning NHRA drag car racer, founded Put on The B.R.A.K.E.S. (Be Responsible and Keep Everyone Safe), a nonprofit committed to training and educating teen drivers and their parents about safe and responsible driving.

The charity offers a teen proactive driving program that helps young people become responsible, defensive drivers and prevent fatal accidents. That first year he trained 50 teens, his sons’ friends. The program grew by word of mouth and has now trained over 50,000 teens across the country.

“It’s a performance driving program, but our emphasis is on safety,” says Herbert.

The four hour class includes one hour in the classroom and three behind the wheel. Teens and their respective parents sign up together but do the program in separate cars. KIA Motors America provides the cars used in the program.

The program is a great next step after traditional driver’s ed classes. Students have fun and learn from highly skilled drivers about how to prevent and handle emergency situations on the road.

Through B.R.A.K.E.S., teens become more conscientious and confident drivers. While it’s only a half-day course, it’s a big start.

Parents attend the class and learn driver safety tips, too. Herbert encourages them to set a good example behind the wheel, including not speeding or texting while driving.

“My goal is to continue working hard and save one teenager at a time,” he says. “I don’t know how many that we’ve saved. We’re going to keep going and try to save as many as we can.”

Herbert is passionate about helping teens learn to be safe on the road to prevent other families from experiencing the heartbreak he and his family endure.

“There’s still grief, but knowing that we’re helping other parents to avoid that that phone call that I got is really worthwhile,” he says. “I think my boys would be proud of that. And I’m happy that we’re able to do something that we can make a difference.”

Just want to drop a note of thanks to KKW for being a part of the driving school. Working in the transportation industry it is my hope that my son is not going to be one of those that cuts off trucks on the road or even worse is in an accident with a truck because of his ignorance of what the truck... Click to Read More!

We just finished the BRAKES course Sunday at Concord. I was absolutely blown away by the experience for myself and especially for my teen. My husband has been out of work for two years, so I had intended to take back the check to hold my seat, but in the end, gratefully gave it as a donation for thi... Click to Read More!