Coach Ron Rivera wants his players to be safe, both on the field and on the road.

The B.R.A.K.E.S. (Be Responsible and Keep Everyone Safe) driving session teaches people to do exactly that. It's a multi-part course for teenagers and adults designed to give behind-the-wheel instructions from professional trainers, including current and former law enforcement officers and professional racing drivers, on how to be safer on the road.

Last Friday, about two dozen of the Washington Commanders' rookie and second-year players went through the sessions in the parking lot of FedExField to become better drivers.

"It was a great experience, coming out here with some of the guys, being able to get in some of these cars and learn some stuff," said offensive tackle Sam Cosmi. "It was a blast today, for sure."

It isn't the first time Rivera has offered the advanced driving course to his players. Back when he was coaching the Carolina Panthers, he invited founder Doug Herbert to instruct the team at zMax Speedway in Concord, North Carolina, after one of the players had been pulled over for driving over 100 mph.

By the time they had gone through the course, Rivera said the Panthers players appreciated what they had learned.

"They thought it was a very good learning experience for them," Rivera said, "because they show you what happens when you lose control of the car." 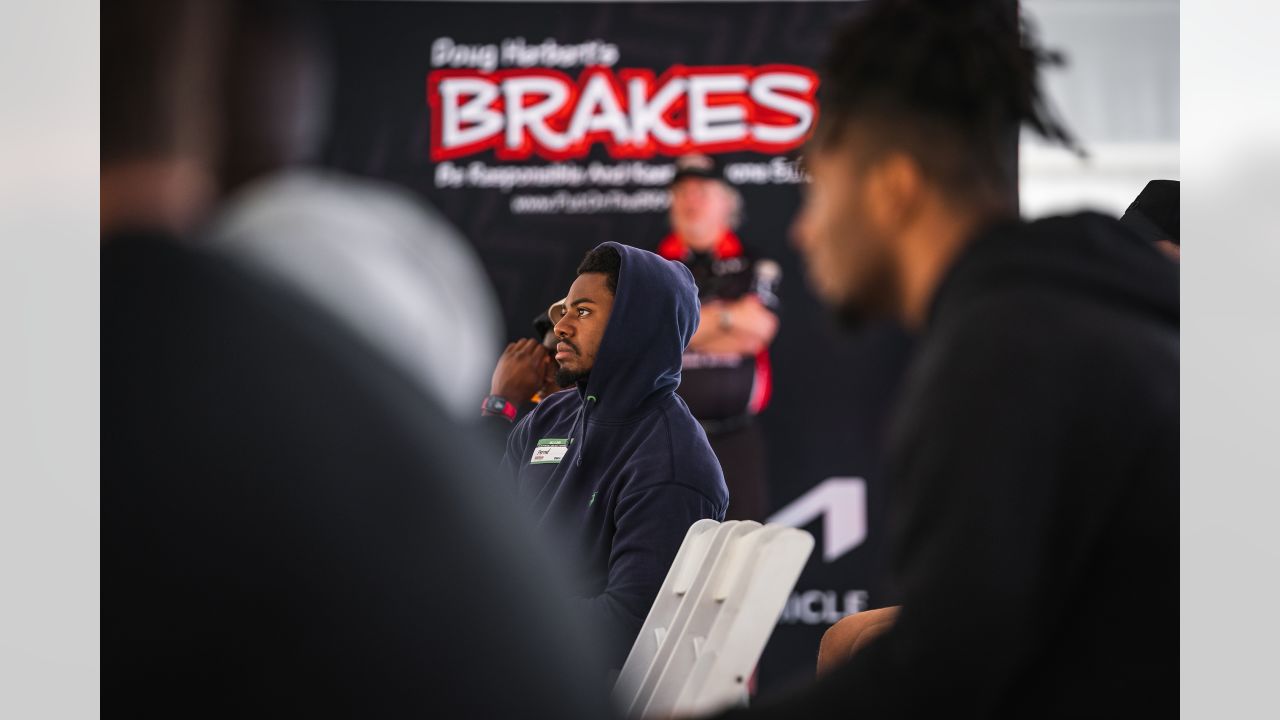 Cosmi's favorite was the skid recovery -- a part of the course designed to teach drivers how to navigate on wet or icy roads. The cars, which were limited to speeds of 25 mph, were outfitted with tires that simulated the feeling of skidding around tight turns.

The spinouts in a controlled environment can be fun, Cosmi said, but it's still a serious technique to master. Cosmi has experienced a real spinout, so he has first-hand experience on how unnerving it can be.

It took Cosmi a couple of tries, but by the fourth attempt, he got the hang of how to make the turns.

"Yeah, a little drifting action there," Cosmi said with a smile. "You don't typically get that in the vehicle."

Herbert, who was a professional driver and organized the driving course after his two sons, Jon and James, were killed in a car crash in 2008, compared driving to reading a play on the field. The players have to know what's coming next to execute the play successfully, he said, and they can't do that if they aren't paying attention.

"I'd drive these race cars going 330 mph," Herbert said. "Well, I guarantee you I am 100% focused on it. Because my life depends on it. And it's no different than driving here."

Another lesson the instructors teach is how to properly eliminate a be aware of blind spots in rear view mirrors. Rivera hasn't driven the course himself, but he has been in the vehicle with someone else at the wheel. The result is "a very stark reality."

"You're sitting there and you have no idea that there's this car in your blind spot," Rivera said. "And then the instructor says, 'Now, look down and see that car.' I said, 'Oh my gosh, I never knew it was there.' He said, 'Exactly. That's the whole point of this.'"

According to the B.R.A.K.E.S. organization, graduates are 64% less likely to get in a crash within their first three years of driving. It's far from where Herbert and his instructors would like it, but it does arm driver with more information on how to safely navigate the road.

To the Team at B.R.A.K.E.S I wanted to let you know that after over 18 months since attending your course in June 2018 my daughter had her 1st accident recently. Something hit her back tire and she starting to fishtail but she took control of the car thanks to the great instructors on your t... Click to Read More!

We just finished the BRAKES course Sunday at Concord. I was absolutely blown away by the experience for myself and especially for my teen. My husband has been out of work for two years, so I had intended to take back the check to hold my seat, but in the end, gratefully gave it as a donation for thi... Click to Read More!