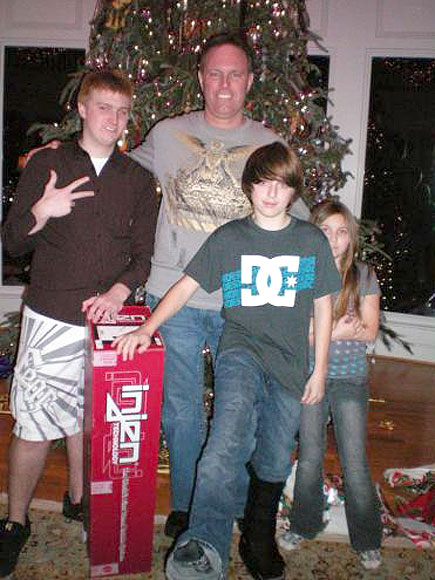 The class starts the same way every time. And every time a room full of once chatty teens suddenly grows silent.

After Doug Herbert, a former professional drag racer, lost his two young sons in a violent car crash, he founded BRAKES (Be Responsible And Keep Everyone Safe) – a non-profit focused on offering teen safe driving classes.

Each class starts with a video that tells his family's devastating story.

In January 2008, Herbert's older son Jon, 17, was driving with his younger brother James, 12, in the passenger seat. The boys were grabbing breakfast at McDonald's in Cornelius, North Carolina. Jon was going 80 mph in a 45 mph zone when he lost control of the car and slammed into a Hummer.

Both were killed instantly. There was almost nothing left of the car.

Herbert, 48, admits he can't watch the video, and that he cries every time it's on. So he usually leaves the room.

But he still makes a point to attend almost every class. And there have been many – almost every weekend since he founded BRAKES not long after his sons died.

That first year, 50 kids went through the class. This year, more than 8,000 will receive the life-saving lessons.

In all, more than 20,000 kids acoss four states have gone through the program – all free of charge. The foundation uses grants and fundraising to ensure that.

After his sons' crash, Herbert learned that motor vehicle accidents are the leading cause of death among teens, according to the CDC.

"And no one is talking about it. I want them to talk about it and to do something about it. And that's what we're doing," says Herbert, who lives in Charlotte.

The single father (Herbert also has a 17-year-old daughter) gathered his friends in the racing business, recruited some of the people who teach the Secret Service to drive, and founded BRAKES.

He regularly received letters, emails and phone calls from parents who say their kids are alive because of what they learned in his class.

"BRAKES not only saved my son's life, but the three other teens who were his passengers," Michelle Dhami tells PEOPLE.

Her 17-year-old son picked up three friends to go to basketball practice and was T-boned on a California freeway. The carload of teens narrowly missed falling 100 over the side of an overpass.

"He was able to control the car because of what he learned. I have no way to thank Doug Herbert," Dhami says. "I think he's an angel. He was so brave to use his loss and make sure I didn't have the same thing."

Herbert says, "Luckily, we get those letters and emails and we have research that proves we're making a difference. Teens are crashing less because of things they've learned at BRAKES. I think my boys would be proud. I would never have chosen to do this before, but I was put in this position and there's nothing I love more now than making a difference."

He says helping save other kids is the best way he knows to keep his own sons' memories alive.

"It makes me smile, makes me so happy to know that my boys are really responsible for helping other teens and making a difference," he says.

Just wanted to let you all know how much our family enjoyed the BRAKES class at El Toro Marine Base on Saturday 12/7 at 1pm. Both my husband and I attended with our son. He gained confidence and skill and felt it was a great experience. My husband and I commented that even at our age, we'd never had... Click to Read More!

To the Team at B.R.A.K.E.S I wanted to let you know that after over 18 months since attending your course in June 2018 my daughter had her 1st accident recently. Something hit her back tire and she starting to fishtail but she took control of the car thanks to the great instructors on your t... Click to Read More!