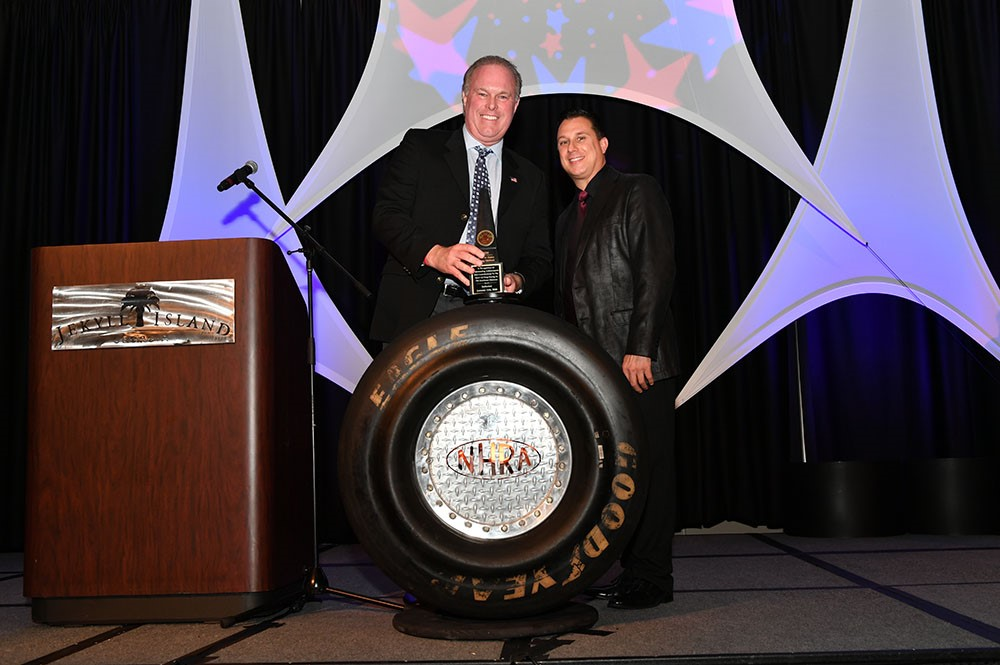 JEKYLL ISLAND, FL (January 15, 2020)– Doug Herbert, the multi-time Top Fuel drag racing champion and founder of the B.R.A.K.E.S. (Be Responsible And Keep Everyone Safe) national teen defensive driving program has been inducted into the NHRA Southeast Division’s Hall of Fame.

The presentation was made during the organization’s seasonal banquet in Jekyll Island, Florida.

In addition, the origination lauded Herbert’s his long-term commitment to on-road safety, through the establishment and considerable growth of his B.R.A.K.E.S. pro-active national teen defensive driving program.

Established in 2008 following a tragic car crash that took the lives of Herbert’s sons Jon and James, the GuideStar Platinum-rated 501(c)(3) non-profit is supported by official vehicle partner Kia Motors America and several other corporate sponsors, major donors and grant providers.  Herbert developed the free lifesaving defensive driver training program to address the number-one cause of death among teens – car crashes – helping to improve road safety for all and prevent other parents from facing the heartbreak of losing a child.

Having surpassed 40,000 teens trained last month, the program established records with more than 7,000 teens trained and more than 67,800 parents taking part in the life-saving program in 2019.  B.R.A.K.E.S. continues to offer comprehensive sessions for teens and their parents at locations throughout the United States.

“Given the impact that the NHRA has had on my career—both on-track and in support of our teen defensive driving program—this honor is especially significant and is something that I deeply cherish,” said Herbert.  “I look forward to working with the NHRA in the years ahead and thank them for all they have done for me, my family, and the B.R.A.K.E.S. mission of making our roadways safer.’”

First, let me say a HUGE thank you for creating the "Put On The Brakes" program. Our youngest daughter, Tessa, went through the training held last year in Irvine, CA. Because I wasn’t working at the time, we couldn’t afford Master Drive (the program we’d put our older daughter through) and a friend ... Click to Read More!

I want to thank everyone at BRAKES for yesterday's Raleigh event. I believe the skills, knowledge, and confidence the kids gained we will make them better and safer drivers. Please pass along my sincere thanks to Matt, Doug and everyone who is involved with this valuable program.... Click to Read More!