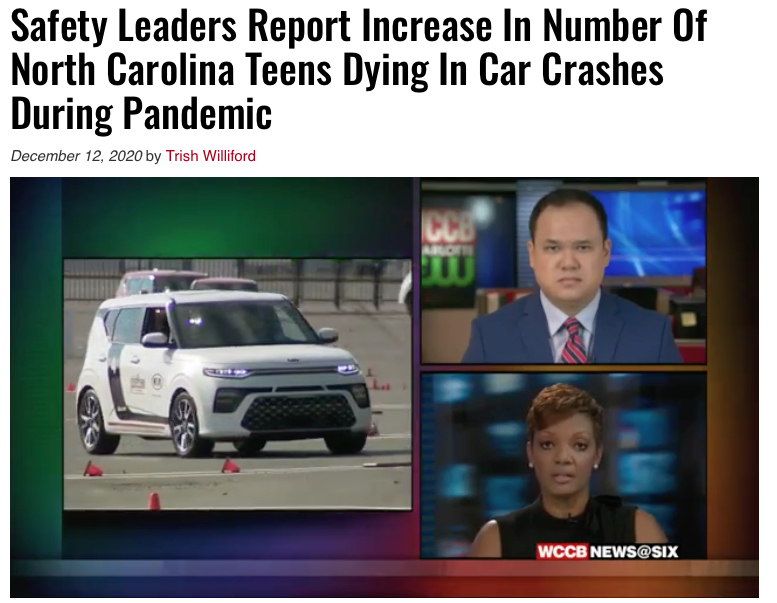 CONCORD – More teens are dying on North Carolina’s roads, that’s according to the NC Highway Patrol. And, officials believe the pandemic is partly to blame.

Safety leaders are taking steps to make sure teens are safe while driving. The teen driving defensive program out of Concord known as B.R.A.K.E.S, is teaming up with the North Carolina State Highway Patrol to make roads safer.

142 teens lost their lives on North Carolina roads in 2020, that’s an increase of 12 percent compared to this time last year, and that’s despite the pandemic.

Officials say with fewer people on the roads, many teens are driving distracted and faster.

“We’ve gotten reports from highway patrol there’s actually teens driving down the road while taking Zoom classes on their phone,” says Doug Herbert, Founder of B.R.A.K.E.S, which stands for ‘Be Responsible and Keep Everyone Safe’.

Herbert hired a few of the best drivers around to help teach teens the rules of the road. Many instructors are members of law enforcement, secret service agents, and even race car drivers.

B.R.A.K.E.S gathers statistics from the state highway patrol about what causes teens to crash, and develops exercises to help train them how to avoid those situations.

I want to thank everyone at BRAKES for yesterday's Raleigh event. I believe the skills, knowledge, and confidence the kids gained we will make them better and safer drivers. Please pass along my sincere thanks to Matt, Doug and everyone who is involved with this valuable program.... Click to Read More!

Thank you for forwarding Emma's letter to me. It looked like she wrote straight from her heart and that is what is most important !!!........her handwriting is another story :-O   Very honestly, I was immensely impressed by the amount of thought and effort that everyone at BRAKES put into the cour... Click to Read More!